Earlier in the year Richard was approached by film maker Tom Hartwell.  He suggested making a short film of us at work, as he was putting together some films on crafts. Never ones to say no to something new, we agreed.

A meeting was held to decide what and how we were going to film and to map every step of the process. We spent a cold but sunny day in February with Tom following our every move as we made and fired hares.

It was surprisingly enjoyable.  I certainly felt very self-conscious to start with, but Tom was excellent at his job. I can’t say that I forgot he was there, but apart from when he put the camera right up close, it was not intimidating.

This is the finished result which he has entered into a craft film festival.

Good luck to him.

These Chinstrap penguins were made for SOTA Gallery in Witney  (www.sotagallery.co.uk). 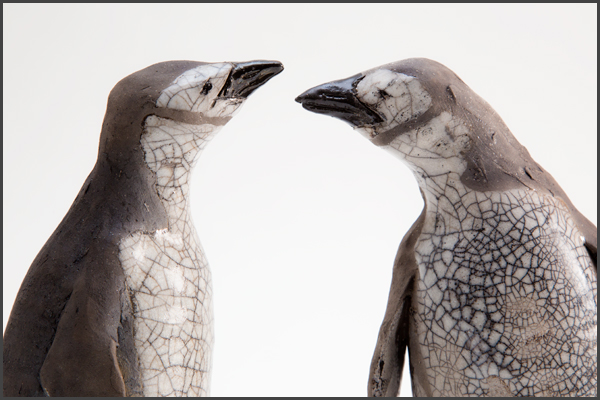 Variations in crackle on these penguins from the same firing.

It is always interesting approaching a new sculpture idea. Photographs are used for reference, but the main thing is to capture some character in the animal. As each one is completely uniquely made, it is great fun to play with the pose and expression as the sculpture progresses. They start on the wheel as an enclosed cylinder, After the clay has dried a little, they are shaped and the head, feet, and wings added. It is getting the head and beak right that gave these fellas their character. 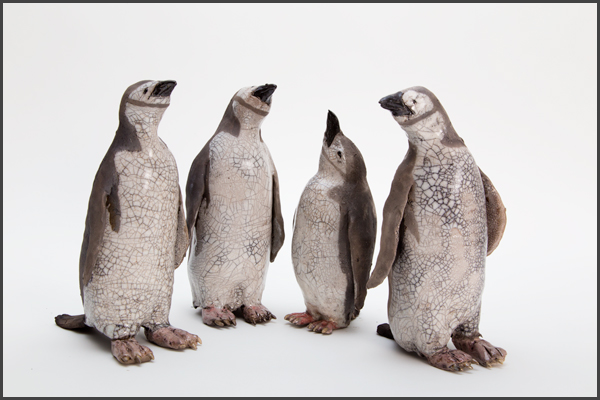 Richard and I both made these. Can you tell who made which penguin?

We have just completed this commission for an author: a pair of Aardvarks. They are to complement a soon to be published children’s book titled ” ‘Aarry the Aardvark”. 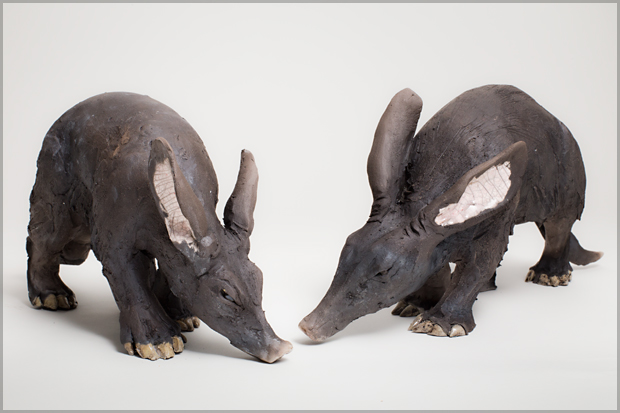 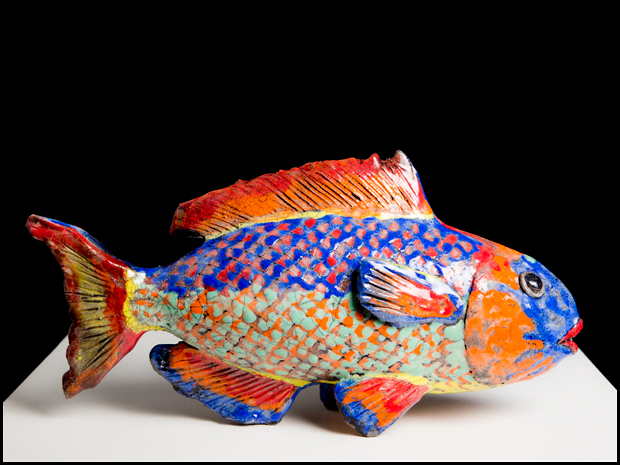 An abandoned birdcage was the starting point for these pieces. The discussion went along the lines of… “What can we use this bird cage for? I think we should put fish in it…they will have to be parrot fish.” 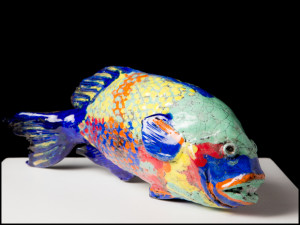 Hence the parrot fish were made. The glazing took most of a day and it felt like we had taken on a big task. But I think the colours have worked well.

All we have to do now is to adapt the cage. Once completed, I will post a picture of the assembled work in the web galleries. 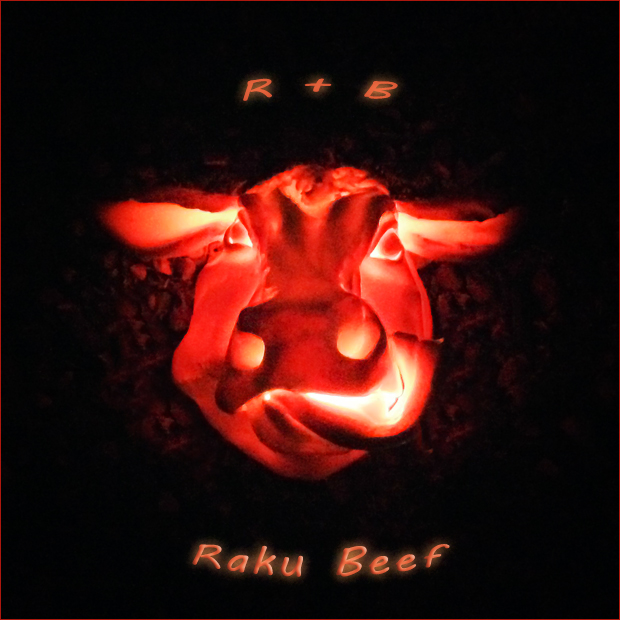 Hope to see you at Amersham Artisans tomorrow, Saturday 6 December. 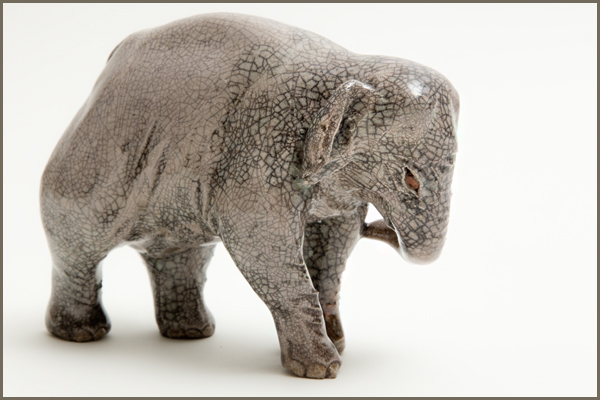 By coincidence we started exhibiting at The Golden Hare  galley in Ampthill not long after a new baby Asian elephant was born at Woburn Safari Park. This led to us getting a commission to make a sculpture of a mother and baby elephant.

It took a bit of modelling to get the looks right. They are made in our usual way; throw a large enclosed cylinder on the wheel followed by manipulation and addition to create the sculpture.

Sizes vary from about 5cm to 15cm tall. They are all raku fired. 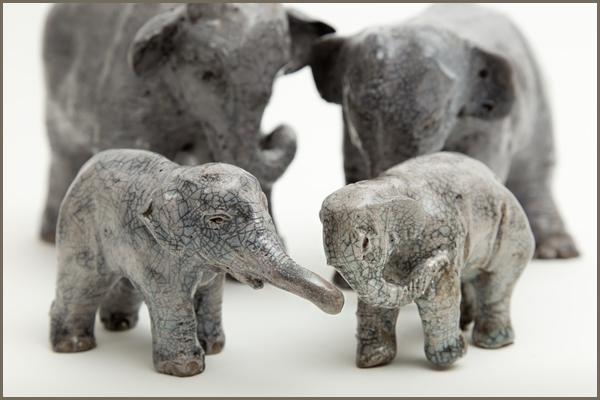 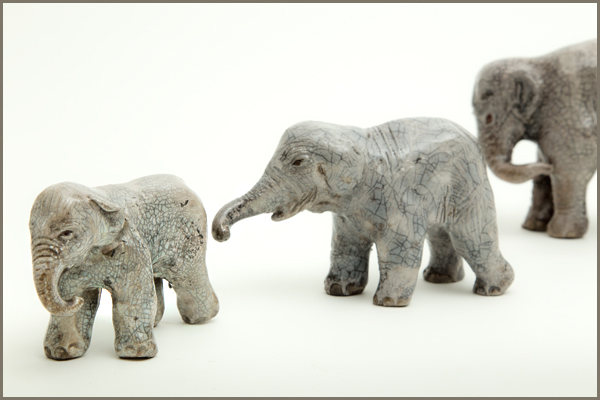 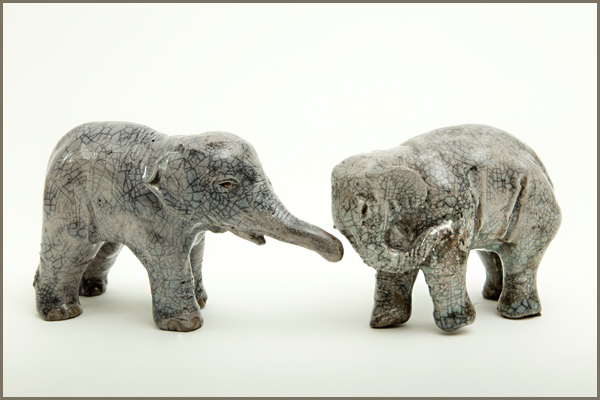 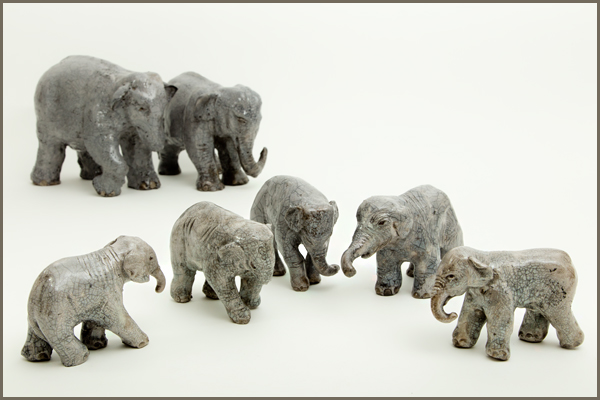 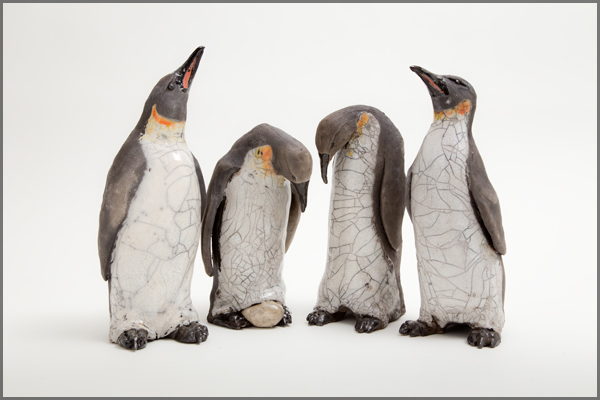 As well as working towards a couple of future exhibitions and keeping up with the orders from galleries, a new raku-fired animal sculpture has joined the menagerie. We have been working on this for a while and finally have something we think is worth showing.

Welcome to the penguinery. The adults are 20-30cm tall.

We would love to hear your first impressions so please leave a reply using the link above. 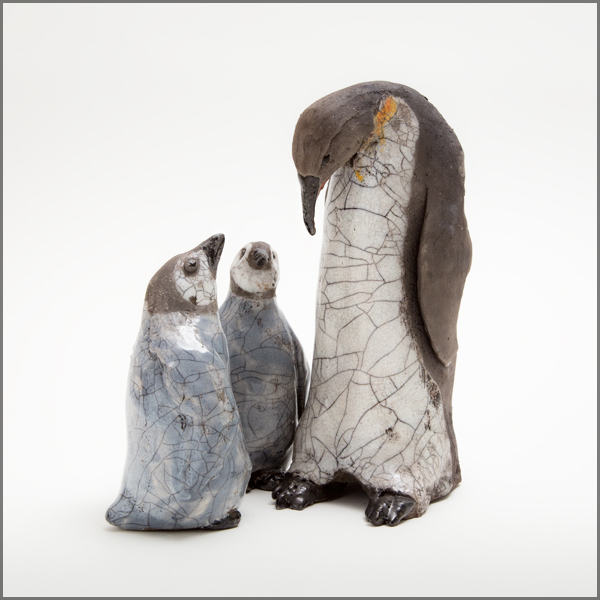 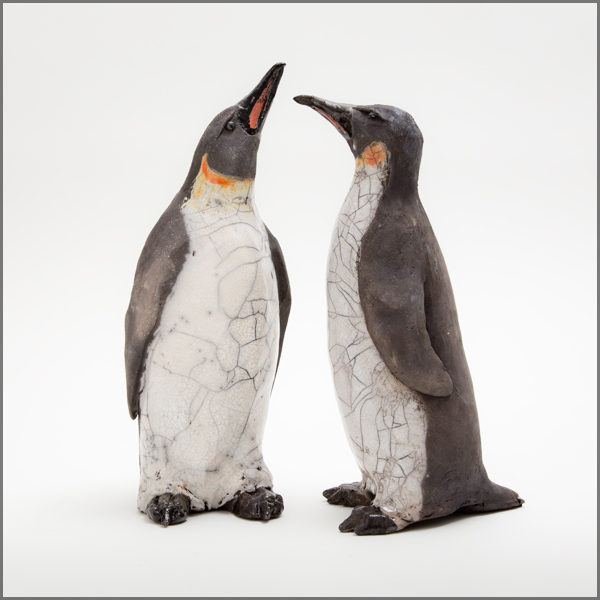 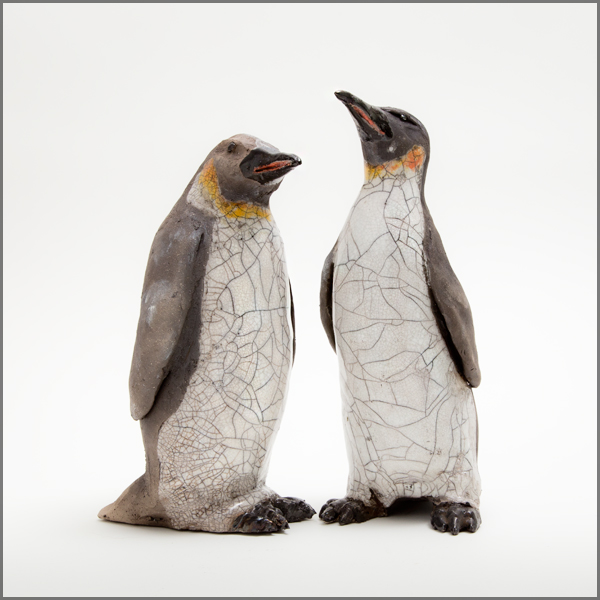 On Saturday, an unexpectedly warm day, members of BPSS and friends gathered at Elaine’s farm in Drayton Beauchamp to Raku their pottery. Richard and I managed to fire over 60 pieces in the day. Paula did some smoke firing as well.

It was a beautiful setting and we were accompanied by red kites and buzzards circling overhead, not to mention numerous dogs and Elaine’s daughter’s magnificent horses. I even managed to find a few loose horse hairs to make a horsehair pot.

Thanks to Peter for the following images of the day’s work: 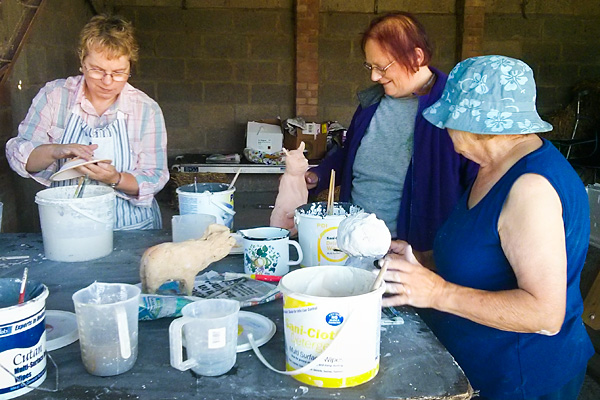 BPSS members busy glazing their pieces prior to firing 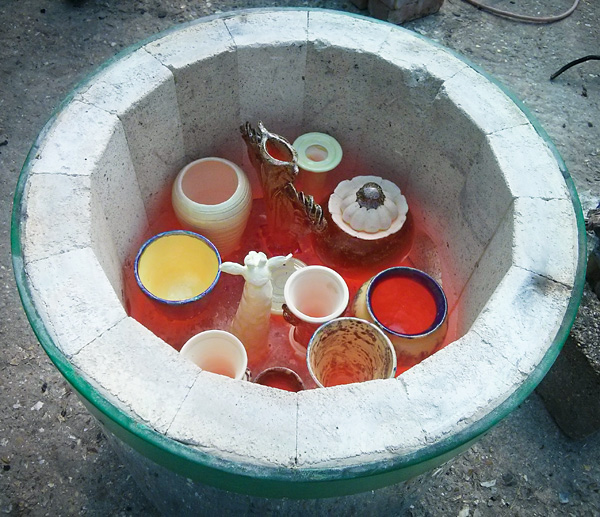 Contents of the kiln just after opening 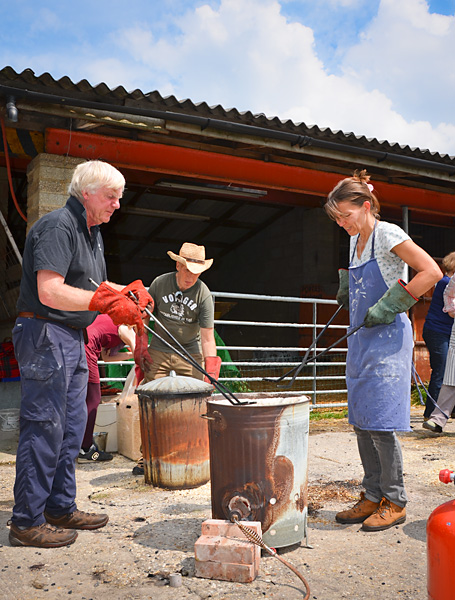 Carol and Richard remove pots from the kiln

Results from a productive day!

I spent this weekend at Chiltern Open Air Museum for the Chiltern Arts Festival. Richard and I set up a glazing workbench and the Raku kiln which enabled us to produce more animal sculptures as well as demonstrate the process to onlookers. Although the mixed weather – thundery showers punctuated with some sunshine – may have discouraged big crowds, the event kept us busy answering questions from a steady stream of curious visitors.

Getting pieces out of the kiln in the rain was challenging and as the picture shows, this was a two-person operation with umbrellas needed to prevent water damaging the work. The Pimms tent and live jazz from the Green nearby helped to prevent stress levels getting too high! 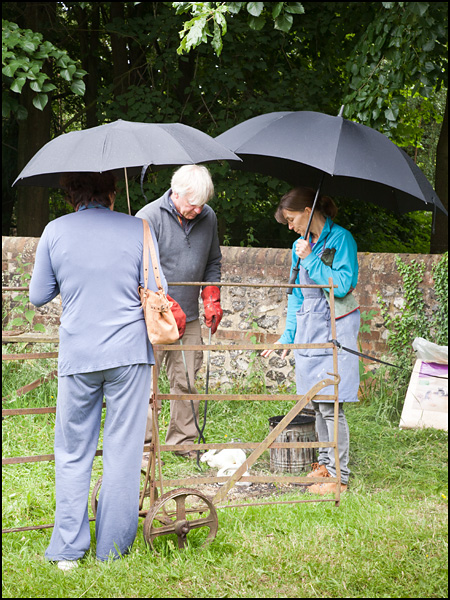 Another hare cools to crackle the glaze while being protected from the rain. Not ideal conditions for watching the process! 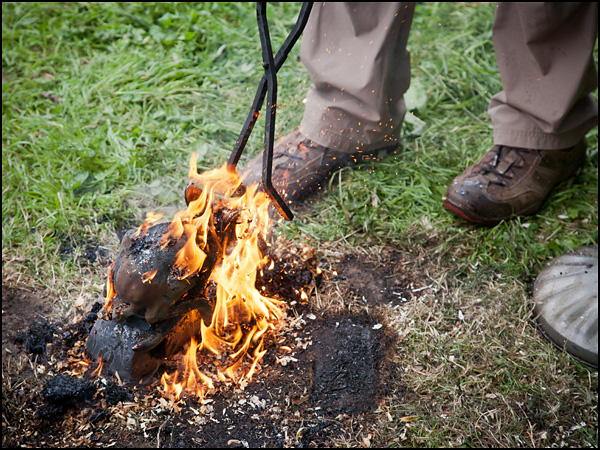 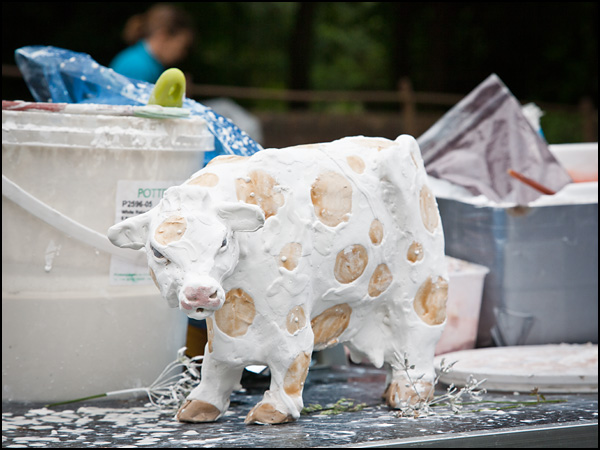 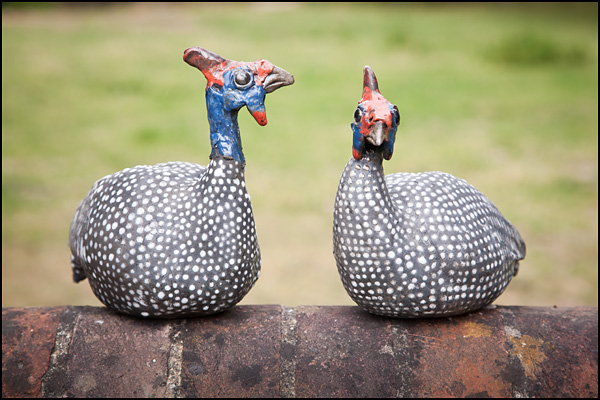 Open Studios was great fun. We were blessed with glorious weather, so were able to fire up the kiln for Raku every day we were open. Our visitors were interesting and interested in what we were doing – how lovely! Some highlights of the event were sculptures set up in the garden, raku guinea fowl – pictures of this piece “in production” below – and hand coiling a large vessel over the 3 weekends.
Here are some images from the Raku firing on the final Saturday afternoon: 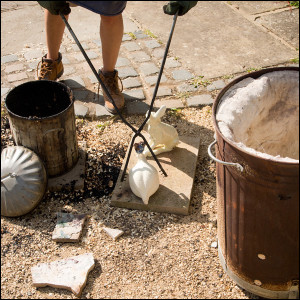 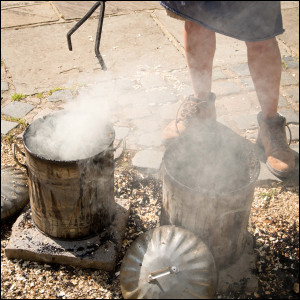 Now placed in the sawdust tub 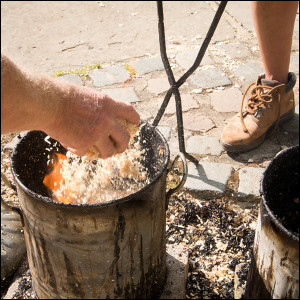 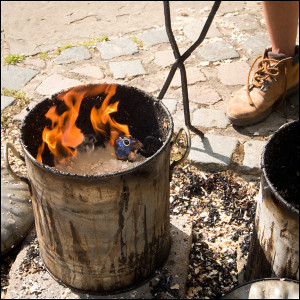 Is it just me or is it getting warm around here?

If you are interested in commissioning work, please get in touch with Carol using the contact form